Can't Think Of An Idea? Steal Mine! 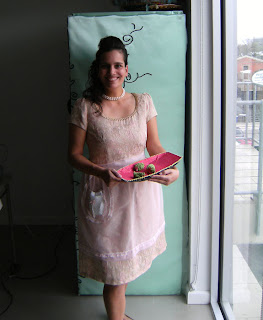 Kitchen Goddess first came into my life around 2004 or so, when I was asked to curate a show with that theme in mind for the Colorado Women's Caucus for Art. The first KG show was in 2006 and ended up being a nationally juried show as well as a full-blown textile installation from local Colorado artists. We had workshops of painstakingly weaving metallic thread around cutlery, glitzing out the most fabulous vaccuum cleaner of all time and using huge quantities of adhesives. To the stains of 'Come On In My Kitchen', and many kitchen goddesses parading in aprons, teetering in heels & party dresses and clutching glasses of wine with devilled eggs ... the kitchen goddess was born. KG went on, as most of you know, to make her mark on San Antonio, in FiberArtSpace last year, with multiple kitchen goddesses, 'ironing tutorials', salami rolls and pickles on a stick.

Imagine my surprise when this morning, someone asked me if a gallery reception invite they were about to send out was my image from this show. I was stunned to see my own postcard image going out for someone else's show! 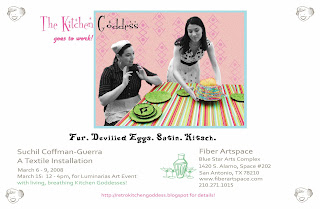 
Turns out that a couple of local artists who were performing in my exhibit were so enamoured with the idea that at the same time this show came out last year for women's history month, they were simultaneously presenting it to someone as their own idea, that they would do as part of their own show in March of 2009. 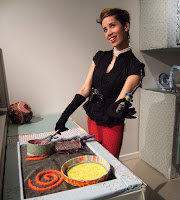 We had some very impassioned models, artists and closet performance-artists who came to recite 'how to be a good wife' to an unsuspecting crowd, those who doled out jello cups and cheesy crackers to the first friday drunks and those who camped up an already campy idea with their good sense of humor. It was a blast, draining, but a lot of fun and I don't think it permanently scarred Laurie, the gallery director. :) (at least i hope not) 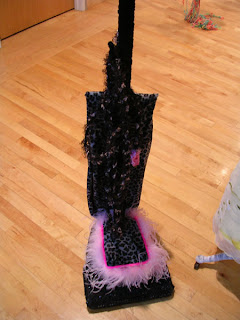 And if you do decide to borrow someone else's concept, which anyone can do, you'd better at least rock the idea and do it right.

So I know I've got some of you out there that are either recovering Kitchen Goddesses or at least mildly entertained by the whole concept. If you've got an opinion on how far you can take someone else's idea/concept/work as your own before attributing or acknowledging where it came from, I'd love to see your comments on this page. ***Return to this blog at http://retrokitchengoddess.blogspot.com/ , post your comments at the bottom of this post, and the best comment will get your very own vintage Kitchen Goddess item, wrapped up with love and Lysol. 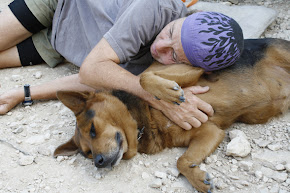 Callie, Princess of Sausages, Consumes Another Soul. Damn her cute fur and smile! 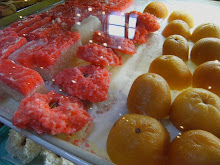 For those moments when just one bag of sugar isn't enough. There is NOTHING like a Mexican bakery to quench desire for the sweet stuff...

Where The Wild Things Are. 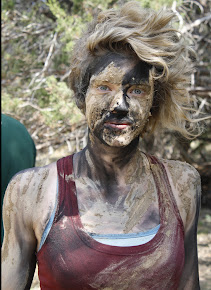 Save A Dog's Life Right This Moment! 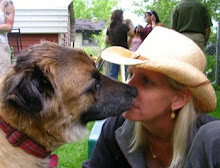 a mixer with attitude...

Oh The Places You Could Go...

Chit Chat With A Proper Goddess

Promote Your Page Too

Environmental Groups That I Adore